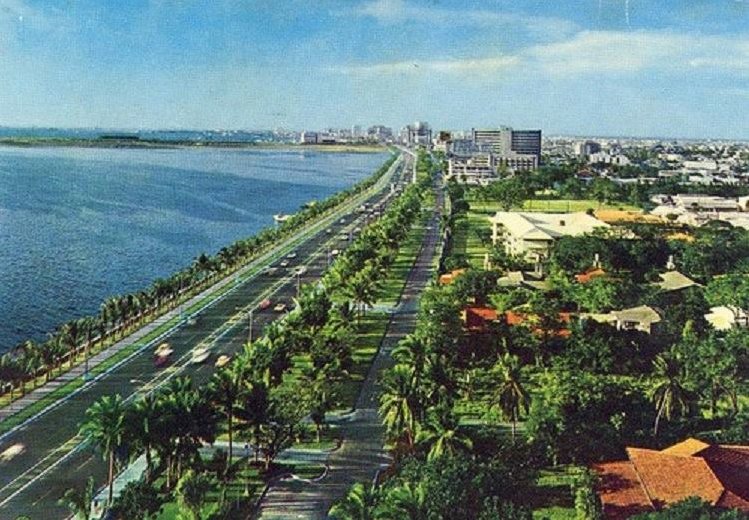 Roxas Boulevard is a popular waterfront promenade in Manila in the Philippines. The boulevard, which runs along the shores of Manila Bay, is well known for its sunsets and stretch of coconut trees. The divided roadway has become a trademark of Philippine tourism, famed for its yacht club, hotels, restaurants, commercial buildings and parks. Originally called Cavite Boulevard,it was renamed Dewey Boulevard in honor of the American Admiral George Dewey, who under his command defeated the Spanish navy in the Battle of Manila Bay in 1898. The boulevard was again renamed to “Heiwa Boulevard” in late 1941 during Japanese Home Rule and Roxas Boulevard in the 1960s to honor President Manuel Roxas, the fifth president of the Republic of Philippines.

The boulevard is also an eight-lane major arterial road in Metro Manila designated as Radial Road 1 that connects the center of the City of Manila with Pasay and Parañaque. The arcing road runs in a north-south direction from Luneta in Manila and ends in Parañaque at the intersection of Ninoy Aquino International Airport Road or NAIA Road. Beyond its southern terminus, starts the Manila-Cavite Expressway, also known as the Coastal Road, or more recently, CAVITEX.

The Cavite Boulevard was part of Architect Daniel Burnham’s plan for beautifying the city of Manila. At the request of Commissioner William Cameron Forbes, Burnham visited the country in 1905 at the height of the City Beautiful movement, a trend in the early 1900s in America for making cities beautiful along scientific lines, for the future urban development of Manila and Baguio City.

According to Burnham’s original concept of the Cavite Boulevard, the bayfront from the Luneta southward should be a continuous parkway, extending in the course of time all the way to the Cavite Navy Yard about 20 miles (32 km) away. This boulevard, about 250 ft (76 m) in width, with roadways, tramways, bridle path, rich plantations, and broad sidewalks, should be available for all classes of people in all sorts of conveyances, and so well shaded with coconut palms, bamboo, and mangoes as to furnish protection from the elements at all times.

In order to make the boulevard presentable and useful as soon as possible, a quick-growing tree like the acacia might be planted, alternating with the trees of slower growth, and be replaced after the latter attain their growth. The boulevard’s seaward side should be planted so as to interrupt occasionally the view of the sea and, by thus adding somewhat of mystery, enhance the value of the stretch of ocean and sky. The boulevard would be on reclaimed land to about as far south as the Old Fort San Antonio Abad in Malate, beyond which it strikes the beach and follows the shore line to Cavite. The possible extension of the ocean boulevard along the north shore would naturally depend upon the development of the town in that direction and upon the question of additional harbor works north of the Pasig River.

Tropical Depression “AMBO” has maintained its strength and is now heading towards Aurora province. Estimated rainfall amount is from 2.5...