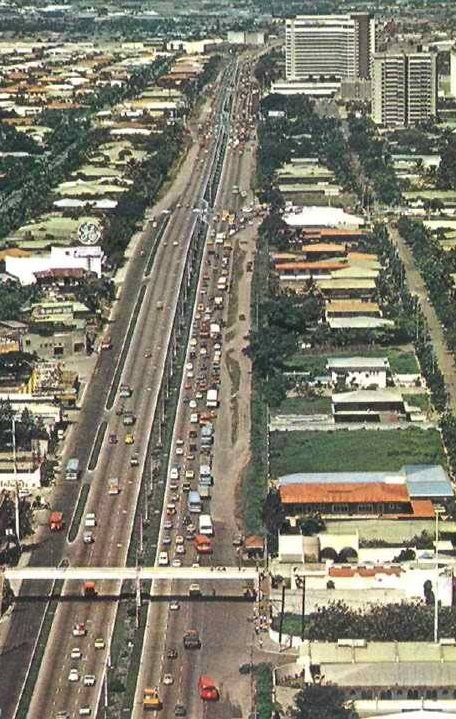 Epifanio de los Santos Avenue (Filipino: Abenida Epifanio de los Santos), commonly referred to by its acronym EDSA, is a limited-access circumferential freeway around Manila, the capital of the Philippines. It is the main thoroughfare in Metro Manila passing through 6 of the capital region’s 17 local government units, namely, from north to south, Caloocan, Quezon City, San Juan, Mandaluyong, Makati and Pasay. The road links the North Luzon Expressway in Balintawak in the north to the South Luzon Expressway at the Magallanes Interchange in the south, as well as the major financial districts of Makati Central Business District, Ortigas Center and Araneta Center. It is the longest and the most congested highway in the metropolis, stretching some 23.8 kilometres (14.8 mi).

The entire road itself is a part of the Circumferential Road 4 system, a network of roads and bridges that acts as the fourth beltway for the City of Manila. The locations around the avenue were marked with great economic and industrial growth, proven by the fact that all but 2 industrial centers in the Metropolis are directly accessible from the thoroughfare. The decent economic growth of the areas around the avenue adds a significant volume of traffic on the avenue, and in recent estimates, EDSA handles an average of 316,345 cars daily,and an average of 2.34 million vehicles go through EDSA every day.

EDSA is a divided carriageway, often consisting of 12 lanes, 6 in either direction, with the elevated railroad Manila Metro Rail Transit System often serving as its median. EDSA is not an expressway, but traffic rules and speed limits are strictly implemented to the vehicles that pass along it. It is operated by the Metro Manila Development Authority and is maintained and constantly being repaired by the Department of Public Works and Highways.

EDSA starts from the Bonifacio Monument (Monumento) Roundabout in Gracepark, Caloocan, adjacent to the Apolonio Samson Road, the western side of the C-4 Road. The roundabout is also the marker of the 1896 Revolution by Andres Bonifacio. The 1.7 kilometers of the road are in Caloocan. The Avenue will then enter Quezon City through the Balintawak District, after an intersection with the North Luzon Expressway in the Balintawak Cloverleaf Interchange.

EDSA crosses much of the northern part of Quezon City, passing through the Project 6 and Muñoz districts. It sharply curves southwards after crossing the North Avenue-West Avenue Intersection in the Triangle Business Park. On the north side of EDSA is the SM City North EDSA. In front of it is the TriNoma mall and the Eton Centris or Centris Walk. ABS-CBN Broadcasting Center and its transmitter can be easily seen from EDSA and continues southwards, slightly turning westwards slowly until it leaves the Triangle Park after crossing the East Avenue-Timog Avenue Intersection, where the GMA Network Center is located. It continues through the district of Cubao, entering the Araneta Center after crossing the Aurora Boulevard Tunnel. In Cubao, several malls, infrastructure and offices are located, most notably the Smart Araneta Coliseum, the biggest coliseum in Southeast Asia. The Avenue curves southwards and enters the Santolan and Socorro districts, where the twin military bases of Camp Rafael Crame and Camp Aguinaldo, are located. The Greenhills Shopping Center and the Eastwood City are also located nearby. EDSA then continues on its route and serves as the boundary of the cities of San Juan and Quezon City. The People Power Monument can be seen on the north side of EDSA in the White Plains Avenue junction. After the 11 kilometers of EDSA in Quezon City, the Avenue will eventually leave the city and enter the City of Mandaluyong. EDSA enters Mandaluyong after crossing the borders of the Ortigas Center. In the Ortigas Center, some notable buildings around the area are the Philippine Overseas Employment Administration building, Robinsons Galleria, SM Megamall, Forum Robinsons (Robinsons Pioneer), and the bronze EDSA Shrine, a memorial church to the 1986 Revolution. It then curves smoothly westwards after it crosses the Pioneer Street, and crosses the Pasig River via the Guadalupe Bridge and leaving the City of Mandaluyong.

It enters the city of Makati after crossing the Pasig River, passing through the districts of Guadalupe, Comembo and Magallanes. In Guadalupe, EDSA provides access to the Rockwell Center, a major mixed-use business park in Makati. The highway also provides quick access to the city of Taguig and the Bonifacio Global City nearby. After crossing Buendia Avenue, the highway enters the Ayala Center, an important industrial district in the Philippines, where the Greenbelt and Glorietta shopping centers are located. The road then curves eastwards and continues on a straight route to the city of Pasay.

EDSA enters Pasay shortly after crossing the South Luzon Expressway in Makati. In Pasay, the highway provides access to the Ninoy Aquino International Airport via a flyover. EDSA enters the Baclaran Shopping Center and continues eastward until it enters the Bay City reclamation area, where the large SM Mall of Asia is located. EDSA’s terminus is at a rotunda in front of the Globe of the SM Mall of Asia.

The lead agency that manages the flow of traffic along EDSA is the Metropolitan Manila Development Authority (MMDA), an agency that is under the Office of the President and is advised by the Metro Manila Mayors League. One of the MMDA’s traffic management schemes that is in effect on EDSA, among other major thoroughfares in the metropolis, is the Uniform Vehicular Volume Reduction Program.

Many have observed that the cause of many traffic jams on EDSA are erring buses and jeepneys. Subsequently, buses have been the target of other traffic management programs, like the MMDA’s Organized Bus Route Program. The MMDA is strictly implementing also the Motorcycle and Bus laning in EDSA, making it the second freeway in the Philippines ever to have such traffic rule to be enforced, after Commonwealth Avenue. The average speed of vehicles in EDSA is 15 kilometres per hour (9.3 mph).

Philippines is Owned By A Single Family?

Roxas Boulevard is a popular waterfront promenade in Manila in the Philippines. The boulevard, which runs along the shores of...