The soap, “Saq Al-bambu (The Bamboo Stalk)”, is a modern Cinderella story about Josephine, a Filipino maid working in Kuwait, who steals the heart of Rashid, the son of her employer. Rashid wants to marry her but his mother does not want him to as she prefers him to have an arranged marriage with someone else.

According to Cabral’s manager, Shandii Bacolod, “Saq Al-bambu” is produced by Sabbah Pictures and currently being aired on Al-Rai TV and MBC Drama in Kuwait, Saudi Arabia, Dubai in United Arab Emirates and other parts of the Middle East.

Aside from Cabral who plays Josephine, other Filipino actors in the cast are Maria Isabel Lopez, Ana Abad Santos, Lou Veloso, Sue Prado, Lilia Cuntapay, and Rhen Escaño. The rest are Kuwaiti actors.

“Although the setting of the story is in Kuwait, the series was actually shot in Dubai and only Mercedes and Rhen went there to shoot their scenes. The others shot their scenes in the Philippines,” Bacolod recalled.

Bacolod said they heard news of the favorable feedback on Cabral’s performance last Wednesday as fans of the show, mostly Kuwaitis, started tweeting about “the pretty actress playing the maid.” 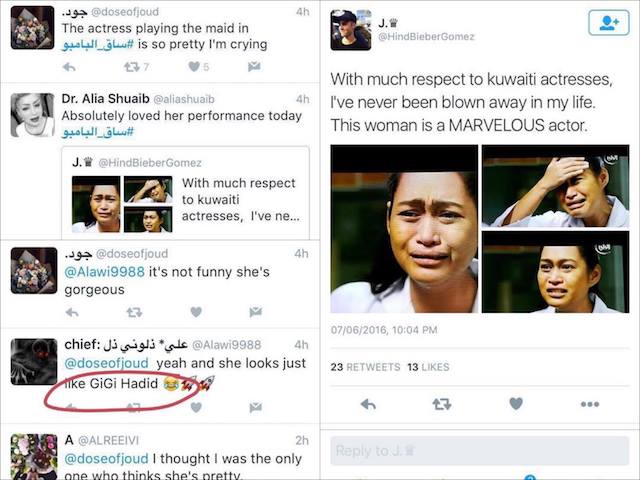 Yes, Cabral, who was recommended for the project by Filipino producer Sarah Pagcaliwagan-Brakensiek, is not just getting raves for her acting but also for her beauty as one Kuwaiti netizen even went as far as to compare her to American supermodel Gigi Hadid.

Bacolod added that Suzy Karajian, assistant general manager of Sabbah Pictures, is raving about Cabral as well and posted on Facebook how “everyone is talking about how amazing she is…a marvelous talent.”

“Mercedes was so overwhelmed with how she was appreciated in another country, she cried. When she did the film ‘Rosita’ in Denmark, the Danish people thought she was a Filipino who trained in acting in Denmark. In some articles, she was even thought of as a Danish-Filipino actor. Now, many think she’s a Kuwaiti actor in this soap,” Bacolod further shared.

Dubbed as the country’s “indie princess,” Cabral won the 2015 World Premieres Film Festival Best Actress for her performance in Alvin Yapan’s “An Kubo sa Kawayanan” and is nominated this year by the Gawad Urian in the same category for Ralston Jover’s “Da Dog Show.”

Aside from the title role of “Rosita” which she did for Danish director Frederikke Aspock, Cabral has also appeared in Park Chan-wook’s Korean vampire thriller “Thirst” as well as in U.K. filmmaker Isaac Julien’s seven installation film “Playtime” alongside James Franco and Maggie Cheung.

She will soon be seen in Alvin Yapan’s “Oro” where she plays the love interest of Joem Bascon.

Manila – Swallowed by the Storm

Manila - Swallowed by the Storm.