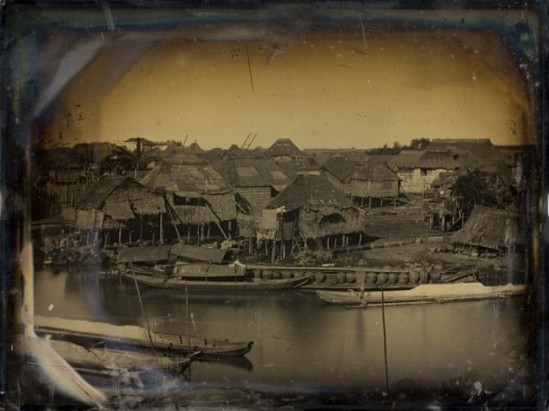 The Oldest Known Photos of the Philippines Ever Taken – Located at the lower Washington Heights area in NYC, the Hispanic Society of America is a century-old institution often mistaken as a sports or social club because of its name. No less than The New York Times described it as the “most misunderstood” place in the city.

Notwithstanding its weak efforts to attract more visitors, the HSA is a museum-cum-research library where one can find world-class paintings by Goya, Velázquez and El Greco, just to name a few.

For Luisa Casella and Rosina Herrera, however, what they discovered  here in April 2007 are more memorable than most things displayed in the museum. Tucked away in a cabinet at the 7th floor of the building were a group of 18 rare daguerreotypes of Manila from the 1840s, possibly the oldest photographic record of the Philippines ever discovered.

At that time, Casella and Herrera were both Andrew W. Mellon Fellows from the Advanced Residency Program in Photograph Conservation (ARP). Their original plan was to rummage HSA’s photo collection and preserve what’s left. Things turned into a different direction when they found the Manila daguerreotypes inside a cardboard box.

Composed of 13 whole plates and 5 half-plates, the photos show incredibly preserved views of Manila, Marikina and Laguna never seen before by the public. Aware of the very nature of these early photographs, they soon embarked on a painstaking project to prevent the artifacts from suffering permanent damage.

To accomplish the mission, they sought the help of the oldest museum dedicated to photography–the George Eastman House. The latter’s Photograph Conservation Department worked closely with different conservation scientists, putting all the work for 18 straight months just to ensure the housings and the photos themselves would be in tiptop shape.

The results, thankfully, are nothing short of remarkable.

Judging by the style of the housings and the photographic process used to produce these pictures, it can be said that the Manila daguerreotypes were taken from the early 1840s to the early 1850s.

Another element that the scientists looked into was the logo of the plate maker. Fifteen of the daguerreotypes discovered share the same logo–a six-pointed star–which suggests that they came from the same plate maker.

As for his identity, the conservation scientists had only one person in mind: Jules Alphonse Eugène Itier (1802-1877), the plate maker of the pictures displayed at the exhibition “Paris et le daguerreotype.”  The said daguerreotypes bear the same “six-pointed star” logo and dated from 1842.

During the course of my research, I’ve also discovered that Itier once served as French attache at Peking, China. Between 1843 and 1846, he visited several Asian countries and took daguerreotypes of people and places he encountered along the way.

Some of Itier’s surviving plates show the earliest portraits of Singapore, Borneo, and–surprise, surprise–Manila! He even described some of our ancestors as peaceful and meek, far from being the savages portrayed by the Westerners.

Is Jules Itier the same person who shot the Manila daguerreotypes discovered in New York City? Maybe. But one sure thing we know so far, and that is both the housings and plates are of French origin.

As for the real story behind these old pictures, we have to dig a little bit deeper to find the answers…

The Manila daguerreotypes were donated by a civil engineer named Charles Massa to the Hispanic Society of America in 1929. His gift also included a historical handbook for those travelling to the Philippines, several photo albums, and nine ambrotypes, or the updated and cheaper version that slowly replaced daguerreotypes starting in the 1850s.

There’s no existing clue that could explain how the daguerreotypes ended up in Massa’s possession. The identity of Massa is a mystery in itself: Not much is known aside from the fact that he once owned a business related to design, was born in New York, and lived in New York City during the time of the donation.

On the back of the daguerreotype housings were inscriptions made by at least five different people. They indicate the exact location where the photos were taken. Three of these inscriptions, as shown below, also give us valuable clues about the people and stories related to these faded photographs.

From these clues, we can extract three information. First, whoever took these photos were obviously fluent in English. Second, the first inscription suggests that the owner once lived in a “country home” (meaning a secondary residence) in Mariquina. Lastly, the mention of the names “Mr. Sturgis” and “Mr. Dyce’s” hints that the photographer was closely related to these people.

Noemi Espinosa, assistant curator at the Hispanic Society of America, went on a search to find more about these names. She discovered that H.P. Sturgis, whose name also appears on the box containing the ambrotypes, was in fact Henry Parkman Sturgis who co-founded Russell & Sturgis Company of Manila in 1828.

The Sturgises were among the first American families who settled in the Philippines long before the Philippine-American War. Their company, considered as the “greatest hemp and sugar-cane company” in the Philippines, remained active until 1875. “Mr. Dyce’s,”meanwhile, could be the Englisman who led a trader insurance company established in Manila in 1850.

Let’s now have a closer look at the 18 stunning Manila daguerreotypes organized into four groups: Manila district, Manila proper, Marikina, and provinces along the Laguna lake. If you prefer a real-life encounter, you might want to visit the Hispanic Society of America in  New York City.

Take note that this is for educational purposes only. Use of these photos for other reasons requires permission from Ms. Caroline Barcella, Hispanic Society of America, and the George Eastman House.

Daguerreotypes were first introduced to the world in 1839. Surprisingly, it only took a few years before it reached the Philippines, making it one of only two countries in Asia (the other one is India) who first used this early photographic process in the region.

The book Informe sobre el estado de las islas Filipinas en 1842 is the first to ever mention photography in the Philippines.  It was written in 1843 by the Spanish diplomat, poet, and adventurer Sinibaldo de Mas who, according to a book by Antoni Homs i Guzmán, also introduced the use of daguerreotypes in the country in 1841. Working as a diplomat of the Spanish government, Sinibaldo didn’t get enough financial support from his bosses. In order to survive, he traveled around the Philippines armed with his camera. He reportedly took photos of the  natives or places he visited, and later sold the pictures.

How and where he got his daguerreotype camera remain a mystery, but there are two possible answers: First, he probably bought it in India in 1840, the same year the camera was first sold commercially in that country. Historical records show that Sinibaldo was in Bengala, India in 1839 and stayed there before going to the Philippines a year later. It’s also possible that a Spaniard who was connected to Sinibaldo first bought the camera in Spain and had it shipped to Manila.

Whatever the reason, we’ll probably never confirm it as no daguerreotypes by Sinibaldo have survived, perhaps because of the country’s tropical climate.

Before the discovery in New York, we’d been told that the oldest existing photos from the Philippines were taken in the 1860s. The daguerreotypes show several Tinguian natives from the Abra province and were part of a collection by an unnamed French engineer.

The Tinguian photos were later ‘dethroned’ by two older photos from the 1840s. One of them is a view of Intramuros, Manila while the other is a portrait of the photographer W. W. Wood. However, no one can pinpoint exactly how old these photos are, with some believing that Wood’s portrait was probably shot in another country and brought here when he decided to open a studio in Manila.

The use of photography in the Philippines became widespread starting in the 1860s. The growth of the industry was more evident by the time the Suez Canal officially opened in 1869, enabling cameras and other photographic products to be easily transported from Europe to the Philippines.

Among the first establishments to sell these products were Zobel’s pharmaceutical on Calle Real 13 and the pharmacy owned by Pablo Sartorius, Rafael Fernández and Jorge de Ludewig.

The 1860s also saw the establishment of the first photo studios in the Philippines, the oldest of which was owned by the British photographer Albert Honiss. This Escolta-based studio, founded in 1865 and remained active until 1874, was commissioned to take pictures of the Russell & Sturgis Company as well as produce the beautifully-made photo album Vistas de Manila (Views of Manila).

Honiss was also credited for making excellent visiting cards from the 1860s, two of which show a Spaniard identified as “Bartolo” and two young Filipino schoolchildren.

1860s visiting cards by Albert Honiss. Source: “The Colonial Imaginary: Photography in the Philippines during the Spanish Period” by Juan Guardiola.

Scenes from the tragic aftermath of the 1863 earthquake have also been preserved through photographs. The pictures, taken by the photographer of the Spanish Royal Household named Martínez Hébert, show the serious impact that the disaster had towards various religious and government buildings

The casualties included the Manila Cathedral, the San Fernando Market, and the residence of the Danish Consul, among others. These rare images are now kept in the Archive of the Royal Palace in Madrid.

Aftermath of the 1863 earthquake. Source: “The Colonial Imaginary: Photography in the Philippines during the Spanish Period” by Juan Guardiola.

A lot of things have changed in terms of how Filipinos use and perceive photography. But one thing remains constant, and that is our curiosity. The fact that you’re reading this article only shows how powerful photographs are in grabbing someone’s attention.

We use pictures to learn, to evoke emotions, to deliver a message, and to bring out change. Photos can also be the window to our past, a way for us to look back on where we came from without relying on texts and boring historical facts alone.

History comes alive when we have pictures to pique our curiosity. So the next time you see a very old photograph, look deeper and you might see an amazing story unfold.

AN ISLAND OF INDULGENCE AND ADVENTURE Have you ever heard of the news that Palawan has won for second straight...