In our desire to have a memorable team outing somewhere with a beach, my officemates and I went on a DIY-itinerary trip to Kuwebang Lampas in Pagbilao, Quezon last May 2015.

Kuwebang Lampas, otherwise known as “Puting Buhangin”, is a remote beach in the Quezon province which boasts of its (surprise, surprise) fine white sand and a nearby small cave (where the name “Kuwebang Lampas” originated from) which can be easily reached from the shore.

What made our trip worthwhile was the fact that everything about that place was an adventure to us. From travelling there, to staying, to coming home. We got to experience a lot of things that were new to us and it was incredibly fun!

Just entering the premises of Kuwebang Lampas entailed a whole lot of hardship my officemates and I did not expect. You see, before coming into close proximity with the beach, we had to first ride a small boat that would take us across a river and into the backside of the beach. That part was easy. What came next was we had to go through a short trek through what seemed like the side of a mountain. Just imagine us walking through uneven soil littered with broken tree branches carrying with us very big bags filled with our clothes and bayongs (bag made of woven palm leaves) filled with uncooked rice; frozen fish, squid, and chicken; condiments; and liters of soda and water. The adventure was endless! Imagine also our surprise when we got to the beach and found out that we could have arrived, hassle-free, via a small ship instead just for a couple of hundred pesos. Funny story, maybe. But the trek, in my opinion, was still the better choice! It may be hard and tiring but it made us appreciate the beach more and allowed for us to bring home more crazy memories.

Another exciting thing about our experience in Kuwebang Lampas was the fact that the beach itself didn’t have any resorts: meaning no rooms, no hotel accommodations, no restaurants, no comfort rooms, na-da. You can still opt to stay the night though, if a day trip doesn’t suffice.

If you go for a day trip, there are available (but limited) huts for rent that you can have for the entire day. If I remember correctly, we rented a hut for about 500 pesos only. If you opt to stay the night, on the other hand, you will have to rent a tent or in our case, bring your own. You will be given a chance to pick a spot where you can set up your tent but if you come in a bit late into the day (let’s say about past noon), you might have a hard time finding an available spot.

The deal with comfort rooms is where things get a bit tricky. You see, since there are no establishments within the premises of Kuwebang Lampas, you will have to make do with nature in times of need. The people in charge of maintaining the place have set up various stalls where you can take a bath. It is just a small area covered in tarpaulin located among the trees so that you will be somewhat hidden from prying eyes while bathing. The water is bought at 50 pesos a bucket and you can ask someone from the store to help carry it to your bathing area. Shampoo and soap are also sold in the same sari-sari store.

Having said all of these, there is nothing really to be afraid of. If you’re into adventure, experiencing nature in this way is one of the best kinds of adventure out there, in my opinion. Plus, your boy scout/girl scout skills will be put into good use during these times. And what better way to bond than doing it while taking a bath, separated only by a thin layer of tarpaulin, right? I’m sure we could experience worse. 🙂

A Feast Fit for Royalty 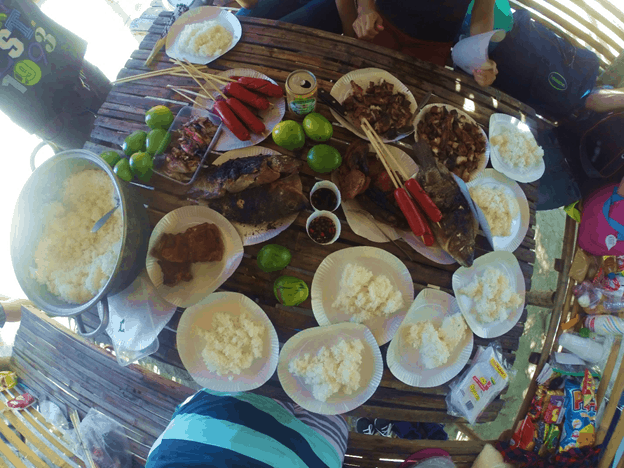 One thing that I also enjoyed doing in our trip was preparing the food. Like what was mentioned earlier, we brought uncooked food into Kuwebang Lampas with the intention of preparing a feast for ourselves by the beach. We had the following dishes in mind: Chicken Adobo, grilled hotdogs, tilapia (a kind of fish), squid, and liempo (pork belly). It was easy setting-up a fire for our grill because there was already an area specifically prepared for people that wanted to cook. What I do recommend is bringing your own cookware. We were lucky because there were a lot of helpful and generous ates and kuyas who let us borrow their pans for cooking. But even still, we had to wait our turn. It was so much fun cooking with only limited tools available, especially since we made our own fire. It was also another fun way for us to bond and get to know each other’s attitudes during hardships (lol). 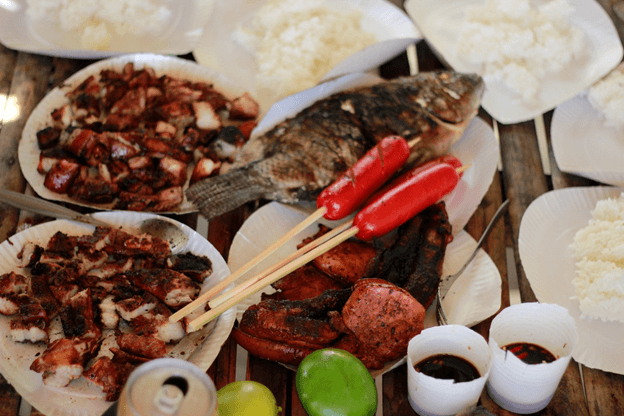 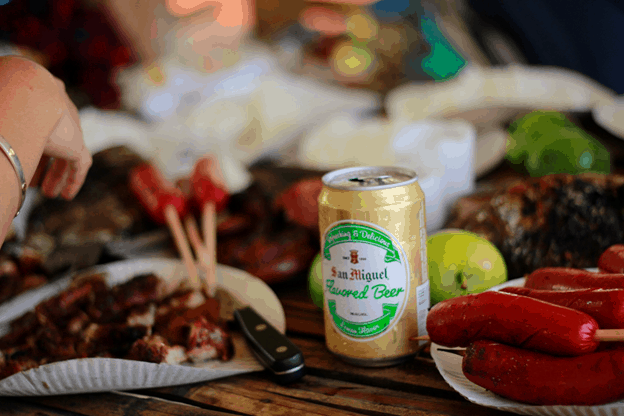 The best part of the trip for me is still swimming in the sea. What I liked best in Kuwebang Lampas is the fact that you don’t have to walk far just to be submerged in water. Just a few steps in and you could already go swimming in the cold refreshing salt water. Just be careful though because a few more steps away from the shore might take you to a sea level where you might not be able to touch the floor anymore. The depth of the sea increases a bit dramatically with each step away from the shore – great for swimmers, a bit problematic to those who do not know how to swim. The beach was also great for night swimming since there weren’t any restrictions that are usually imposed in private resorts when it came to swimming at night. I remember swimming until about 9pm with my officemates and it was really a great time for us to just talk and relax. 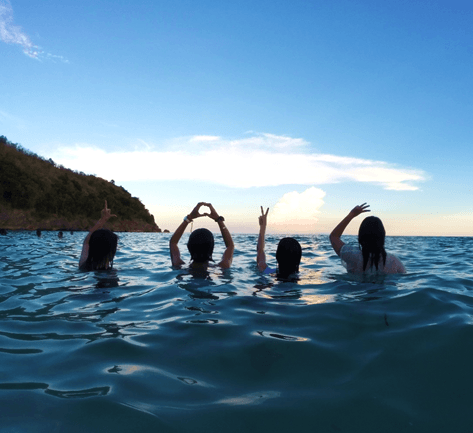 Another great thing about the beach at Kuwebang Lampas is the fact that the sand there is really white and fine. Walking in the water was a breeze since each step was not hindered by big sharp rocks. It wasn’t at all painful for our feet to tread the beach and the sea unlike other beaches closer to the metro. If you wanted the big rocks though, you could easily experience that on your way to the nearby cave.

In my opinion, the cave itself wasn’t that spectacular. Perhaps it was because it was filled with people when we came there and the passageway throughout the cave was filled with big rocks: some slippery, some really sharp. But what I do like about the cave is you get to see the other side of the sea. As compared to the shore where you get to pitch your tents, the sea on the other side of the cave is deeper and more open. Swimming there was much more refreshing since only a handful of people can reach that place (those that do not know how to swim were already filtered out). If you want to experience the sea more, it is better to swim at this part of the beach.

Overall, my experience in Kuwebang Lampas was definitely one for the books. Even until now, I still think fondly of the things we went through during that trip we had in May. It was in that trip that my bond with my officemates became stronger and the friendships we had became so much tighter and for that, I have the island to thank.

So what are you waiting for? Experience Kuwebang Lampas for yourself! Form a group and head to Pagbilao, Quezon now! 🙂

Jeyrick Sigmaton became an internet sensation when his photos resembling popular Asian stars such as Lee Min Ho and Vic...