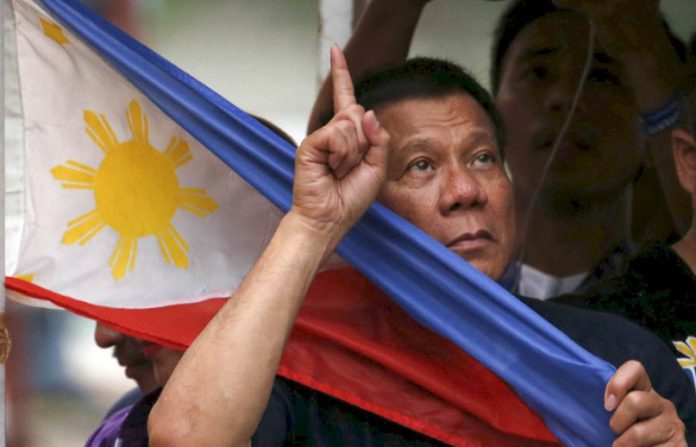 Duterte to deliver powerful SONA – President Rodrigo Duterte would deliver Monday his much-anticipated first State of the Nation Address (SONA) that officials claimed would stir the patriotic feelings of every Filipino.

Duterte himself wrote the address, which is expected to last for about 38 minutes, not counting the ad libs and applauses, Presidential Communication Secretary Martin Andanar said Sunday.
“The address of the President, personally written by the President, will be a very powerful speech that will awaken the patriot in every Filipino,” Andanar said in a press conference in Davao City.
“I don’t want to exaggerate but the first time I read the speech, it made me cry. That’s how good, that’s how emotionally stirring the speech of our president is,” he added.
Andanar did not elaborate on why the speech, which underwent review last Saturday, moved him to tears.
Interestingly, Andanar’s subordinate, Presidential Communication Assistant Secretary Ramon Cualoping II, told reporters last week that Duterte’s first SONA would focus more on policies rather than drama.
“I think there will be less of the drama and more of the policies for action that he needs from Senate and Congress because he wants them to be his partners for change,” Cualoping said in a press briefing in Batasang Pambansa last July 18.
Andanar revealed that the draft of the speech underwent more than 10 revisions. He said Duterte found the drafting of the address “enjoyable.”
Officials were tight-lipped on the contents of the speech but based on previous statements by Duterte and his allies, the issues to be discussed include peace and order, the administration’s priority bills, the 10-point economic agenda and the West Philippine Sea (South China Sea) dispute.

In a speech he delivered in Isabela City, Basilan last July 21, Duterte said he would highlight the need to end the Mindanao conflict in his first SONA.
“Every Filipino life is precious. Regardless of what you think of yourself, I view you as my brother. I hope we can talk so we can attain peace,” the president said.
“We need to stop this war. I will repeat this in my SONA. Do not hate Moro. If we can’t stop clashes for now, do not add hatred in your heart,” he added.
Andanar confirmed Sunday that the president would talk about a key national security pronouncement during his address. He said Duterte, former President Fidel Ramos, peace adviser Jesus Dureza and national security adviser Hermogenes Esperon Jr. met last Saturday to discuss the issue.
“That meeting was so productive and that meeting led to a very important addition to the state of the nation address speech of the president,” Andanar said
When asked if it was about Ramos’s acceptance of Duterte’s offer for him to become a special envoy to China, Andanar replied: “More than that.”
Duterte asked Ramos to fly to China and talk to Chinese officials after the Permanent Court of Arbitration based in the Hague had voided Beijing’s territorial claim in the South China Sea. Duterte has said that he would take into account the interests allies of the Philippines in any negotiation.
A Malacañang source who spoke on condition of anonymity told The STAR in an earlier interview that Duterte would make an “official statement” on the arbitral tribunal’s landmark ruling.

Duterte, whose allies now constitute what was described as a “super majority” in Congress, is also expected to discuss his administration’s legislative agenda.
Paola Alvarez, spokesperson of the Finance department told journalists last week that the president may unveil a “comprehensive tax package” that is in line with his 10-point socioeconomic agenda.
Alvarez said Duterte might also emphasize the need to revive death penalty which the president views as a retribution rather than a deterrent to crime.
The president might also push for amendments to the Constitution that would lead to the establishment of a federal type of government, she added. Duterte had said federalism would promote development outside Metro Manila and would solve the problems plaguing Mindanao.
Duterte is also not expected to blame previous administrations for the country’s problems.
“I think based on his personality, you don’t see him doing that and he is one who takes charge and he is accountable for his actions all throughout,” Alvarez said.
“I think it would be the same tone and there will not be any blaming game.”

Officials said Duterte’s first SONA would be a complete departure from the procession of glitz and glamor and lavishness that used to mark the event during previous administrations.
Malacañang has reminded lawmakers, their spouses and other guests to refrain from wearing long gowns but to just come in business attire. Alvarez said the objective was to ensure that the public’s focus would be on the president’s message and not on the outfits of attendees.
“You have the option of wearing Filipiniana as long as, for the ladies, it will not be more than knee length. Yes, it was specifically asked of us to require the ladies not to have long dresses,” Alvarez said.
The number of lawmakers who will escort Duterte to the plenary hall will also be reduced.
“Instead of having a lot of congressmen there, we will be minimizing this to the Senate President and the Speaker of the House and afterward we will have the majority floor leader of both Houses to escort the President,” Alvarez said.
Award-winning independent film director Brillante Mendoza, who agreed to direct the SONA for free, said the event would be simple and would show Filipinos “the real Duterte.”
Officials said the menu would not be that lavish as well. It will include native chips in the form salted duck egg with dressing, mongo soup paired with smoked fish with alugbati on grissini bread, fresh lumpia ubod in pouch and chicken and spicy tuna empanaditas.
Other dishes to be served to guests are sotong goreng or deep fried calamari tossed in chili and bell pepper, crispy triangles of flaked chicken adobo and mushrooms, fried lumpia ubod, pandesal with kesong puti and beef steak served on the spot, penne with taba ng talangka sauce, balut pâté in profiteroles and chicken skin crackling.
The menu will serve about 800 people, including the 293 House members and 24 senators.
source: philstar.com

The Pride of Antique – Where Mountains Meet the Sea

Aside from the Antique rice terraces in the town of San Remegio, which we have featured few weeks ago, there...