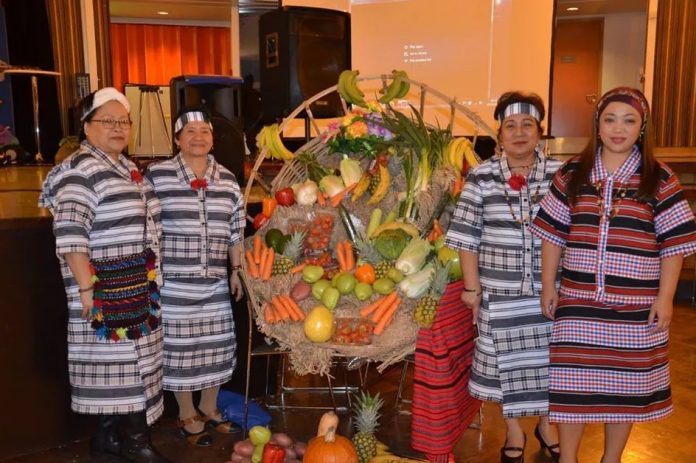 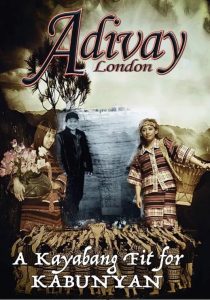 Bristol, United Kingdom is hardly a place you have in mind to have a Kayabang made that is so extraordinary, it impresses even the unknowing passer-by. Besides, in this part of the world, an Igorot Kayabang is unheard of. Yet, a kayabang, about 1.7 meters tall was built, by hand, by one man in a record breaking 3 days.

A Kayabang is a basket, originally woven and worn by the women in Benguet, Philippines. It is made of bamboo and is strapped at the back of the women’s head and is originally used to carry root crops, vegetables and fruits harvested from the farms. In time, The Kayabang has become a symbol of abundance and is proudly displayed in the household.

Winstrom (Wency) Aquino, dubbed as ‘craftsman extraordinaire’ has created this Kayabang beauty for the Benguet Organisation UK (BOUK) in his spare time. Spare time, as we know, is a luxury in the western world. He took on this challenge after a BOUK meeting to discuss what centrepiece should be shown during the 8th ADIVAY London. The members agreed that a Kayabang would symbolise the Benguet culture perfectly. To pay tribute to this Igorot icon, it has to be big and grand. Many members thought that the only way we can have a big kayabang is to order it from the Philippines but Wency has other plans in mind. He wanted to build it and when he was asked if he could complete the task, his sober facial expression made one realise that he was serious about it. Being a former director of a branch of Technical Education and Skills Development Authority (TESDA) in the Philippines, no one doubted Wency’s skill and ability. This technical-vocational institution has produced many a skilled hands in the labour market around the globe, and is probably one of the best things that the Philippine Government has done for their citizens- to train people and give them the technical skills and knowledge enough to land them jobs. Two things that are great with TESDA are their ability to ingrain in their students that attention to detail matters and the high standards of their program, thereby producing quality students with quality work. Wency is who we can consider a handyman, a jack-of-all-trades and the BOUK, feel proud and privileged that he has shared his skills with us. Bear in mind that his expert hands were also instrumental in building the IGOROT UK’s Igorot Village which was displayed in Hounslow, London in July 2015 as part of the Asia Summer Festival. This event showcased the Igorot culture. The Igorot Village, which Wency helped engineer, was a 2 X 3 meter Ifugao rice terraces model, designed by Eden Baed of Cambridge. This stunning creation graced the Hounslow event for 2 days and was displayed again in the 20 gongs anniversary celebration of the IGOROT UK. 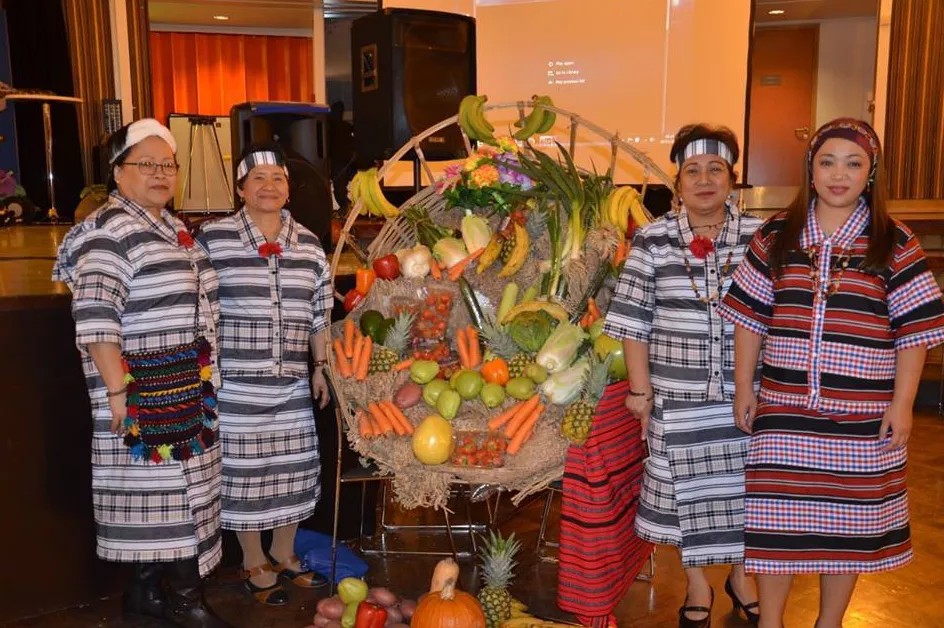 Time and distance were the only consideration in this task as Wency lives in Bristol, a busy city which is about 130 miles from London. And how could we have helped him build this iconic basket? With more people working, we could have helped reduce the time in half, and we could have built it higher, perhaps up to a grand 2 metres. But then, we could also have made mistakes with our clumsy, untrained and unskilled hands, and it might not be to the quality and specification that is required. Plus, everyone was confident that Wency is all of us rolled into one. He is his own army and everything he needs is already with him. It was a solo endeavour but Wency did it with fervour, with so much gusto albeit the challenging cold gushes of wind outside his residence. The bamboo sticks he used were once part of furniture- a cabinet, Wency reckons. Too dry to cut up, Wency has to soak the sticks in water until they were softer. Then he has to cut them to size. This was followed by the painstaking task of shaving the bamboo pieces to a pliable degree. The latter, he reports was the hardest thing to do. 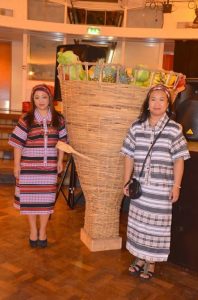 So why all the trouble, BOUK? Why subject your most skilled member to a few days of unpaid work? The reason is culture. We are all one in our aim of preserving and promoting our Igorot culture, so it will be passed on and enjoyed by the next generations. We do our best to immortalise parts of our culture through documentation, but practicing it is the best way of preservation. Arts and craft in Igorot culture is only vastly explored with its weaving, clothing and body adornment and accessories. It is other crafts like the making of the kayabang, the pasiking (woven back pack), the koli/gusi (earthen jar) and others, always take a back seat. Partly also, because of the attention grabbing dances and beating of the gongs that these Igorot crafts does not get highlighted that much.

It’s about time that the Kayabang comes back as a highlight, a symbol of a great culture, striving for preservation. Mount Kabunyan in Bakun, Benguet is sometimes referred to as the Home of the Igorot supreme deity called Kabunyan, and Mout Pulag in Bokod, Benguet, is his playground. Kabunyan’s assistance or intercessions was always invoked first in all life’s situations especially in thanksgiving and in misfortune and when the people suffer illness, bereavement and sorrow. The offerings during Canaos, the prayers and chants cited in Igorot events and gatherings are all offered to Kabunyan. Specifically in Benguet, many of these offerings were loaded and carried inside a Kayabang. In the olden days, the women carry the Kayabang in the early morning to go to the farm and along the way, they knock on their neighbor’s doors to fetch them, so there will be a huge group of women marching to the farm, with Kayabangs on their heads and they sing and chant with the bamboo musical instrument called piw-piw on their hands as they make their way. It would have been a magnificent sight.

The BOUK pay tribute to our heritage, our identity, our culture, and Wency Aquino who built it did not disappoint. He delivered and we thank God for the many blessings He has bestowed upon us here in the UK and the blessings of a great culture. Surely, Kabunyan would look and be pleased with our offering. Indeed, Wency has built the one Kayabang fit for the gods.

The cold November wind reminds one that winter is coming and England will wallow into early darkness, the longer hours of the nights seem a good reason enough to enjoy the comfort and warmth of one’s home. But for a one man team like Mr Winstrom Aquino (Wency), his hands itch at the thought of building what hasn’t been built before. His mind grew restless as the warm drink in his hand hardly quenches his thirst. He goes out and inspects his tools, his gaze goes to the bamboo slats, leftover pieces left from the one giant Kayabang he made just a couple of days ago and already delivered to London. He sighs and remembers his exhaustion at making that one Kayabang- all worth it for a good cause he reminds himself. He looks up and made his decision, there is enough to make another one- a giant Kayabang to rival his own handicraft. Benguet Org UK seems to be happy with the one giant Kayabang. Would he still make the other? The challenge now is time and distance………….

In late November, The City of London played host to the 8th Adivay London by the Benguet ‘natives’ living and working in the UK. London’s splendid tourist sights seem to brighten up to the sound of the Igorot gongs. As winter loomed ahead, the Adivay London aimed to give the Igorot UK it’s last big bash for the year. The Adivay was the last part of the cultural extravaganza of the 20 gongs anniversary of the Igorot UK which commenced with the Ifugao’s Gotad, Kalinga and Apayao’s Ullalim ad UK and Mt Province’s Lang-ay Festival London. Benguet culture was at it’s finest as the Pentagon Hall was adorned by two magnificent Kayabangs. The audience couldn’t believe that such a pair of majestic art was hand crafted in Bristol by one man. In the Benguet belief system, one would say that Wency has appeased the AP-APO/ KAAPUAN (the spirits of the ancestors), and was touched by the hands of God. Amazing indeed, that Wency used his skills to to honour this Igorot relic . The two Kayabangs of Adivay London will forever be remembered, built by the hands of one Man- A symbol of Benguet’s rich culture and the abundance of its soil. Wency will be remembered for creating One Kayabang for the Kaapuan and another Kayabang for Kabunyan.

Mountain-climbing for the Weak: My Trip to Mt. Pinatubo

Hiking, trekking, mountaineering, mountain-climbing. So many words, each with different levels of difficulty, but all point to the same thing....