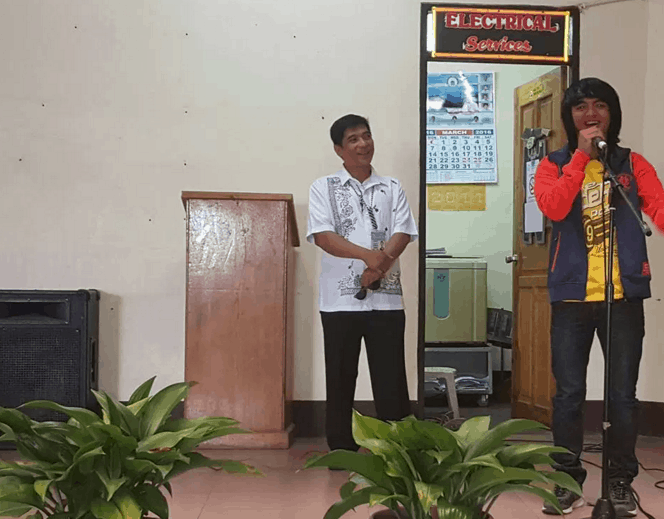 Carrotman is now part of the Provincial Government Family.
Jeyrick Sigmaton a.k.a. Carrotman is now a member of the Provincial LGU family. He recently signed a one-month contract with the provincial government and is with the Provincial Tourism Office. His appointment starts March 16, 2016 to April 15 this year.
Governor Leonard Mayaen proposed the idea of a one-month mentoring program to Sigmaton’s party with the purpose of familiarizing Jeyrick about the province and to help him adjust to the limelight.
“We cannot deny that Mr. Sigmaton is already a celebrity. In fact, he is now considered as the Ambassador of Goodwill for his fellow Igorots. We are doing this for the best interest of Mr. Sigmaton and his immediate family. This province’s intervention is deemed judicious and proper because it cannot be helped that Jeyrick will be constantly asked to comment or promote the good practices in his province. Surely, he will be asked about what Mountain Province can offer to the outside world. Just like any star, Jeyrick’s actions will be reflective of his people and of the image of the province as a whole,” he said.
The governor also reiterated his appeal to people not to give a political colour to this move of the provincial government.
The decision to form a committee purposely for Jeyrick’s grooming course is a result of a proposal of one who made a study of Jeyrick and his meteoric rise to stardom.
“We have been witnesses to the rise and fall of stars. We, too, are aware of the training, tutoring and coaching that contenders for beauty pageants and singing contests have to undergo. Therefore, I believe and trust that the provincial government has the right resources to help Jeyrick cope with his new world; hence the committee formed.”
In addition, the governor also reiterated that he is not in need of any publicity because it is a fact that he is unopposed in the upcoming gubernatorial elections.
“The Provincial Government is only there to be of assistance to Mr. Sigmaton. We are here to provide a brief transition program which we think can equip him with some basics he will need for his new world,” the governor added.
He further clarified that the provincial government has nothing to do with any transaction between Sigmaton and any television network. Any deal that Jeyrick will strike with any entity or outside the province is his business,” he said.
While living in Bontoc, the provincial government will provide board and lodging for Mr. Sigmaton and his personal assistant. This is on top of the wage that he will be receiving at the end of his contract.
While contracted by the provincial government, Sigmaton is expected to learn as many facts about Mountain Province which include its people, cultures and traditions, dances, tourist spots, etc. that he can share to people outside the province.
Provincial Administrator Johnny Lausan said, “With this short period of one month, we are hopeful that we will be able to groom Jeyrick in preparation for the outside world. We hope that the committee assigned to assist him will be able to teach him the essentials.”

Meanwhile, the governor also said that the Provincial Government is always there to be of help to Sigmaton’s education as the PLGU has its institutionalized programs purposely for basic literacy and skills training namely: 1. Mountain Province Student Financial Assistance Program (MPSFAP); 2. Inclusive Economic Growth and Employment Generation program in partnership with the Technical Education and Skills Development Authority (TESDA) in training beneficiaries on various skills to prepare the participants for employment either locally or internationally; 3. Special Program for the Employment of Students (SPES); 4. Aid to Alternative Learning System/ Basic Literacy Services under the PLGU’s Special Purpose Appropriation among others.
Jeyrick is expected to join his “kaka-ilyans” during the Mountain Province Day and Lang-ay Festival festivites.// PIO-MP Press Release

MANILA, Philippines – Rappler editors named the following candidates as the winners for each of the 3 separate segments of...